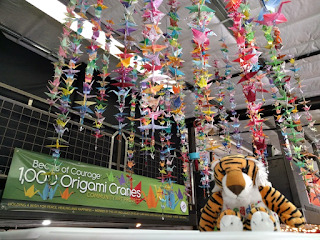 On April 19, 2017, Beads of Courage unveiled the 1,000 Origami Cranes Community Art Project. This project celebrates the life and legacy of Beads of Courage member Kelsey Luria, who lost her battle to Acute Myeloid Leukemia in April 2015. Known as “Queen Bee” to her friends and family, Kelsey was a ray of sunshine and positivity throughout her treatment journey. Her family continues to remember her through the Bald Beauties Project and spreading her joy for life through art. 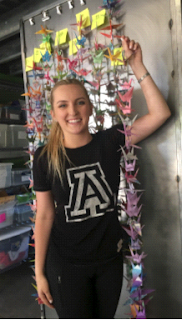 In April, volunteers from the Tucson community came together to fold one thousand origami cranes in honor of Kelsey, guided by her aunt Coppelia Tarantal. Japanese legend says that people with the patience and commitment to complete the project will be granted a wish. Together, we will hold a wish for children and teens coping with cancer and other serious illnesses to find a cure, happiness, and strength throughout their journey. The community turnout was inspiring and, in three weeks, over 1,500 cranes were folded and strung from the ceiling at Beads of Courage Headquarters.


Thank you to all the supporters who joined us in celebrating the life of Kelsey Luria! The installation is located at our headquarters: 3230 N. Dodge Blvd., Suite J, Tucson. Beads of Courage loves to engage the community to honor and commemorate the courage of children and teens coping with serious illness. Make a tax-deductible donation today to support Beads of Courage’s efforts to help children and teens record, tell, and own their stories of courage!