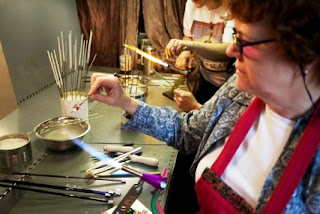 To say that Beads of Courage coming into Debora Sims’ life was fate would be an understatement. We had the privilege to talk with Debora about bead making, family, and worldly travels, and her ‘Trickster Bead’ – our April Bead of the Month.

Almost 10 years ago, Debora’s friend attempted to convince her to open a bead studio. She told Debora, “If you have a strong enough feeling about it, follow it. You never know where it will take you.” Inspired by these words and her instinct, Debora opened her studio and a month later discovered Beads of Courage. 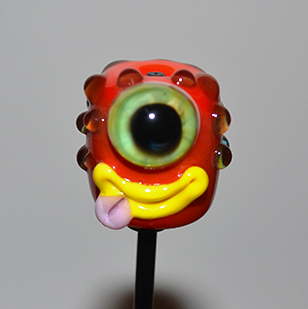 Debora makes beads for the pure joy of it. She told us that the money she makes selling beads goes back into making more beads for members of the Beads of Courage Program. Bead making allows her to give back to a community that she has been a part of for over 30 years. In 1988, her son Jason passed away from leukemia, a form of cancer in the bone marrow.

For the month of April, Debora created the Trickster Bead in honor of Jason’s lively personality. She told us that his favorite holiday was April Fools’ Day; his birthday was in April and he loved to laugh and play pranks on his loved ones!

“I wanted the Trickster Bead to reflect pure joy in honor of Jason,” Debora said. “I wanted to make a bead that the kids would like — something colorful and bumpy that would put a giggle on a kid’s face.” 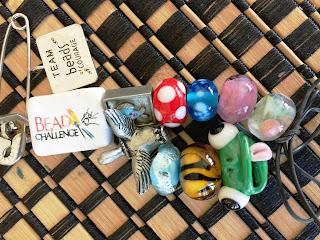 Today, Debora takes beads around the world with her. In the photo of her Carry a Bead strand, each bead has traveled to a different part of the world: the red and white polka dot bead rode the Grand Prix track in Monaco, the frog was carried up the Amazon river into the rain forests of Ecuador, the tiger visited the Roman Coliseum, the blue and silver bead traveled to Bali, and the pink one took in the sights of Japan.

Thank you Debora for sharing your touching story with us and for creating the April Bead of the Month! 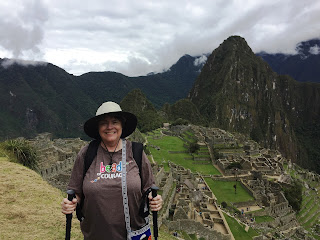 NOTE:  The Beads of Courage Bead of the Month features exclusive limited-edition wearable art supporting the mission of Beads of Courage. The Bead of the Month series offers a new, limited-edition handcrafted glass bead each month of the year. These beads have been commissioned by Beads of Courage especially for this new series, and only 100 of each bead will be created. Don’t miss this opportunity to purchase an exclusive new piece of wearable art each month. Your purchase supports the mission of Beads of Courage, a 501(c)3 organization providing arts-in-medicine supportive care programs for children coping with cancer and other serious illnesses.

LINK:  Beads of Courage Bead of the Month