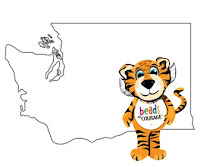 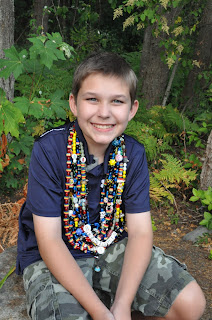 Did you know that Seattle Children’s Hospital started Beads of Courage in their Hematology and Oncology departments in 2011? While I was visiting Seattle Children’s, I learned more about the hematology and oncology departments. Hematology is the branch of medicine concerning the study of blood, the blood-forming organs, and blood diseases, whereas oncology departments manage treatments for people with cancer. We support over 200 Hematology/Oncology programs across the world, and we provide beads to members and teens to help record, tell, and own their stories of courage! I am so happy that the children and teens at Seattle Children’s Hospital have their beads to help them show and honor their courage.
While I was visiting, I met Benjamin a member who receives Beads of Courage. He showed me all of his beads and explained everything that they represented. I asked him about his rainbow beads, because you can see that he has quite a few! Benjamin told me that he received a rainbow bead each time he went to physical therapy. Benjamin is definitely one of our members that Makes Courage Roar! Help support Beads of Courage by donating today, and help kids like Benjamin commemorate their stories of courage!

Courage Tiger’s 2017 Road Trip is a feature of the 9th Annual Bead Challenge, a three-month nationwide fundraiser and beadraiser for Beads of Courage. As the official Beads of Courage mascot, Courage Tiger is visiting all 50 states to highlight the incredible work our organization does by sharing stories of our courageous members, families, clinicians, and the caring community of artists and supporters who make our vital work possible. Please get involved in Bead Challenge 2017 by visiting www.beadchallenge.org today. Sign up to PARTICIPATE as a fundraiser, CREATE glass beads, or DONATE to the cause. With your help, we can Make Courage Roar for kids coping with serious illness! Many thanks to Bead Challenge 2017 presenting sponsor Northwestern Mutual and supporting sponsor Soda Lime Times.