Young Racer Carries Beads of Courage to Give Back to Peers

Callum Smith is turning heads with his talent as a Junior Shifter Kart Racer in the S5 series.  At just 14 years of age, he has achieved a perfect score so far in 2015, winning all the regional and national races in his class, including four regional series races and four national races.

And don’t mistake this type of racing for recreational go-karting.  Shifter karts are a challenge to drive and master, and many of today’s top drivers in NASCAR, IndyCar and F1 honed their skills in these powerful racing machines.

Succeeding as a racer is just one of the challenges Callum has faced with fierce determination.  At age 10, he was diagnosed with Crohn’s disease, an inflammatory disorder of the digestive tract that can have life-threatening complications.

After his diagnosis, he was thrust into a frightening, unknown world of medical tests and procedures, hospital stays and clinic visits.  He underwent scopes, x-rays, colonoscopies and surgeries.

During the early days of treatment, Callum and his family were introduced to Beads of Courage by child life specialists at Sutter Memorial Hospital in Sacramento.  He began receiving a different colored bead to chronicle every milestone along his treatment journey.

Four years later, his Crohn’s disease is now in remission, though he continues to get IV infusions every eight weeks to maintain that status, and continues to receive Beads of Courage.

Callum says, “To me, my beads represent courage and overcoming adversity.  When I was younger, I used to have a lot of anxiety before I underwent a medical procedure. The pride of earning a bead for my hardships has helped me conquer each and every obstacle.  Not only do my beads serve as an inspiration for future success, but they remind me of who I have become, and how I can inspire others as a result of coping with my disease.”

Now, Callum is taking the desire to inspire children and teens coping with serious illness one step further.
When Beads of Courage introduced a motorsports-themed kit this summer as part of our “Carry A Bead” program, participating was a no-brainer for the young racer and his family.

Callum’s mom Leigh says, “Beads of Courage already had a very special place in my heart.  So, when I saw the online promotions for the Carry A Bead kit for motorsports, I knew we had to purchase some to give back to the program that has given so much to Callum in some of the most difficult and challenging times in his life.

“Being avid motor racing fans, and given Cal’s involvement in the sport of Karting, I also felt that this was the perfect opportunity to tie his racing and his own personal experience with Beads of Courage together.”

Through the Carry A Bead program, people of all ages and backgrounds – from ordinary citizens to famous celebrities and athletes – are asked to literally “carry” or wear a pair of beads during an event or activity.

We believe the good intentions and caring thoughts of Carry A Bead participants go into the beads during this intentional act of caring.

Afterwards, Carry A Bead participants return one bead to us, along with a note of encouragement, to be given to a child in the Beads of Courage Program.  These beads become coveted Act of Courage beads, given to children to acknowledge special accomplishments during treatment or to provide an extra dose of encouragement on tough treatment days. 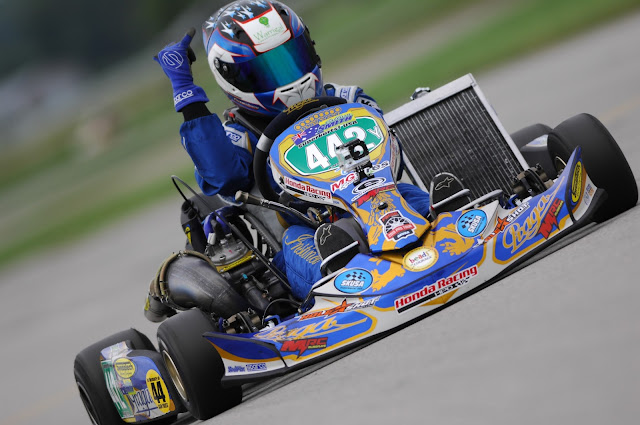 Callum proudly displays a Beads of Courage sticker on the nose of his shifter kart.
(Photo by On Track Promotions)

Leigh says, “Not only are Callum’s beads a visual reminder of what he has endured over the last five years, but they also serve to remind us how fortunate and blessed he is to still be in remission after four years.  His Beads of Courage also remind us of the many other children and teens who are battling very serious illnesses and coping with much worse health issues.  Along with those children, I also think of their parents who have to endure the anguish and feelings of utter helplessness one feels when you have a child with a serious illness or disease.”

Beads of Courage needs YOU to be a champion for a child in treatment! 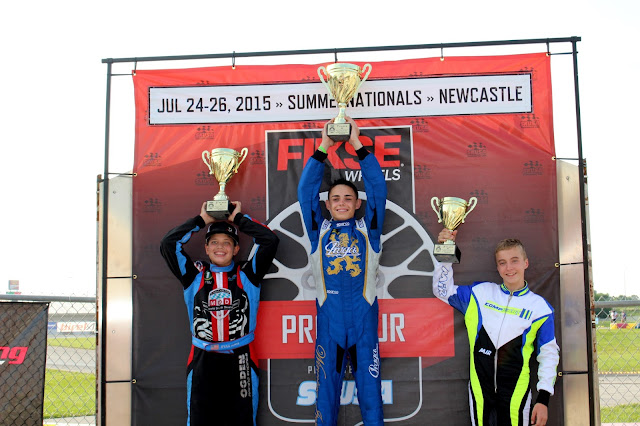 Join the Carry A Bead program to support children and teens coping with cancer and other serious illness.  It’s easy to get started!  Carry A Bead kits are available for just $12 with free shipping* and you can carry beads as often as you’d like.  We have three special Carry A Bead offers this summer:

*NOTE:  Shipping is FREE in the continental US. Please select “International” when ordering if recipient is located outside the continental US.  Your purchase supports the mission of Beads of Courage, a 501(c)3 organization providing arts-in-medicine supportive care programs for children coping with cancer and other serious illness.